The Race to VoLTE

Home / Blog / The Race to VoLTE

Hip Hip Hooray! After a particularly rough ride to an all IP mobile network, EE has finally improved the reliability of its voice calls.

Our favourite network performance investigator, RootMetrics, noticed a drop in EE’s network rating when the telecoms company introduced VoLTE (Voice over Long Term Evolution). EE rolled out their VoLTE calling service across the UK in May of 2016. The company released the service in hopes of blessing its customers and businesses with speedy calls over their 4G network.

VoLTE, also known as Voice over Long-term Evolution, refers to a service in which mobile phone users can make calls over a 4G LTE network, rather than 3G and 2G.

For its users, VoLTE gives them access to higher call quality that’s far superior to its predecessors. In addition to that, VoLTE means that calls can connect twice as fast as they could with 3G and 2G. Better yet, there’s been reports of users’ battery faring much better when it comes to making calls with 4G.

Unfortunately, VoLTE is still in its infancy with not every network provider and handset offering the shiny new service.

Not got VoLTE? Packnet recommends a Softphone application when using VoIP outside the office.

In the first of half of the year, EE’s competitors in VoLTE, Vodafone and Three simply overthrew EE when it came to reliability of calls. This was a surprise, considering Three and Vodafone’s VoLTE services were rolled out slower than EE’s.

“Everybody sees the challenges switching to IP. There are risks of making a big sudden switch like that. You can decide to roll out gradually or go full throttle and do it all at once. The operators are taking different approaches.”

The second half of the year showed big changes in the VoLTE race. Three, the king of VoLTE reliability was promptly usurped by EE’s surprising rise to the top. The mobile network giant, managed to secure all six Rootscore awards and of course, secure itself as the top dog in mobile network performance.

In the first half of the year, EE placed approximately 80% of calls via VoLTE, however, thanks to major improvements, EE has seen a 95% rise in VoLTE calls in the second half of the year. 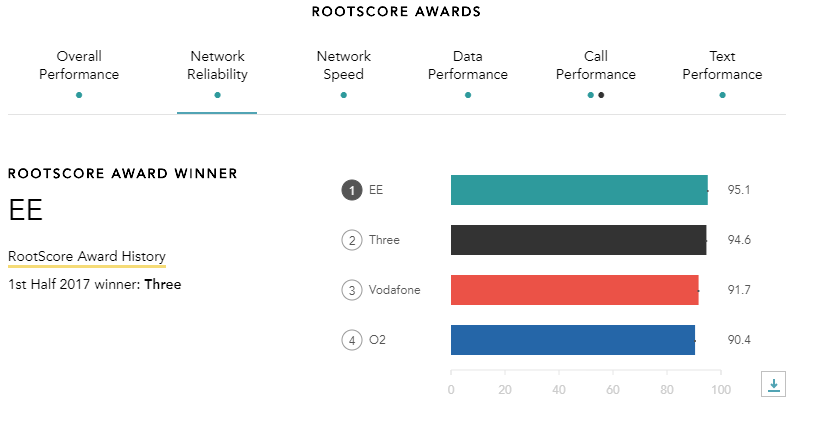 Vodafone, the previous winner of two national awards, were left empty-handed in the second half of the year after a slip down in ratings. O2 also found itself at the bottom, but improvement in the mobile network’s texting performance shows signs of hope. Rootmetrics suggest that if O2 manages to improve its performance in rural areas, the mobile network could quickly find itself rising up the leaderboard.

With all that big hoorah around VoLTE, don’t think we’re out of our jobs yet! Business hosted telephony is still the superior choice when it comes to speedy calls, HD call quality and features galore.

Noticed the VoLTE in your notification bar during calls? Let us know how it’s been?