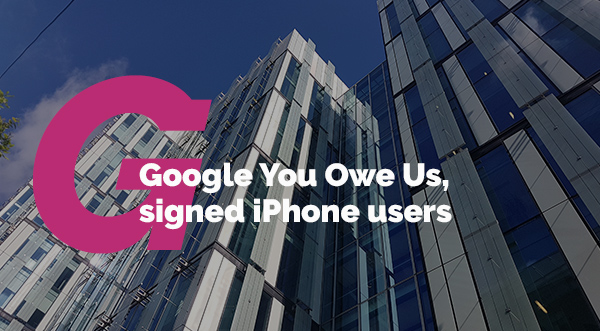 Everyone’s favorite company got a nice surprise for the holidays. However, I can’t say that the surprise was nice.  Now, don’t tell them I told you, but it was a good old class action lawsuit.

I know what you’re thinking, ‘What the hell is going on?’

Vigilante group ‘Google You Owe Us’ has surfaced with claims of Google violating the privacy of millions of iPhone users between 2011 and 2012.

The group says that the personal information of millions of users was taken via Google’s nifty little trick of bypassing the default privacy settings on Safari. The group has notoriously dubbed this move as the ‘Safari Workaround’.

How does it work?

The Safari Workaround tracks the user’s internet browsing history (I know some of you are sweating at this). This data is then sold to Google’s  ‘DoubleClick Service’. Through this service, advertisers are able to tune adverts to suit an individual.

For example, if you’re particularly fond of makeup, then best believe you’d be seeing ads for the latest palettes and lipsticks as you browse. Through Google’s advertising efforts, the tech giant has pocketed a sum of more than $80m and the number continues to grow.

The claim, which is headed by Which?’s former executive director, Richard Lloyd could result in a total payout of £2.7 billion to UK users. This means every affected customer could receive £500 pounds. If the claim is upheld, it could mean the largest payout to UK consumers.

“I believe that what Google did was quite simply against the law.

Their actions have affected millions, and we’ll be asking the courts to remedy this major breach of trust.

Through this action, we will send a strong message to Google and other tech giants in Silicon Valley that we’re not afraid to fight back if our laws are broken.”

If you’re down here, you’re probably wondering how the hell you can check in on this claim.

Fear not, here’s handy a criteria provided by the Google You Owe Us group :

If you’ve checked all these points, you are automatically included in the lawsuit. If the lawsuit is accepted, then you will be asked to register and provide proof to claim the money.

I’d say good luck, but I didn’t have an iPhone during this time, therefore, I’m a tad bitter.